Menu
Log in
Register
Install the app
You are using an out of date browser. It may not display this or other websites correctly.
You should upgrade or use an alternative browser.

I just ordered a Masso G3 and MPG Pendant. I've got a Millright Mega V (19") which we plan to use at our office to machine aluminum parts for a 70mm motion picture film scanner we're building (we do film scanning of 8mm through 35mm on a commercial scanner, but these large gauges aren't really available on most machines). We have already had many of the parts made by a friend of mine with an Avid CNC setup, but I upgraded my old Millright M3 (which couldn't do aluminum reliably) with a Mega V when I saw their kickstarter last fall. Got it all up and running just in time to get shut down due to the coronavirus pandemic. I'm able to get into the office a bit to do some work so I've been tinkering with it and planning some upgrades.

The main reason I got the Masso is because the Millright controller is just kinda cheesy, in my opinion. It's an arduino-based setup that uses grbl and the recommended Gcode sender is UGS. I've had nothing but trouble with it - things like it freaking out when it hits the homing switches, and not being able to resume a job after breaking a tool. I also bought a 1.5kW spindle and VFD to replace the DeWalt router that comes with the Mega V, and UGS doesn't work as nicely with a spindle as other setups. So instead of dealing with all that, I decided to just ditch their controller entirely. I'll be using their stepper drivers, and maybe the power supply and e-stop button. But most likely I'll build a simple box that sits on top of my current enclosure (almost done building it - see attached), with a couple DIN rails inside to hold the VFD, Masso, stepper drivers and power supplies.

Looking forward to getting this soon! 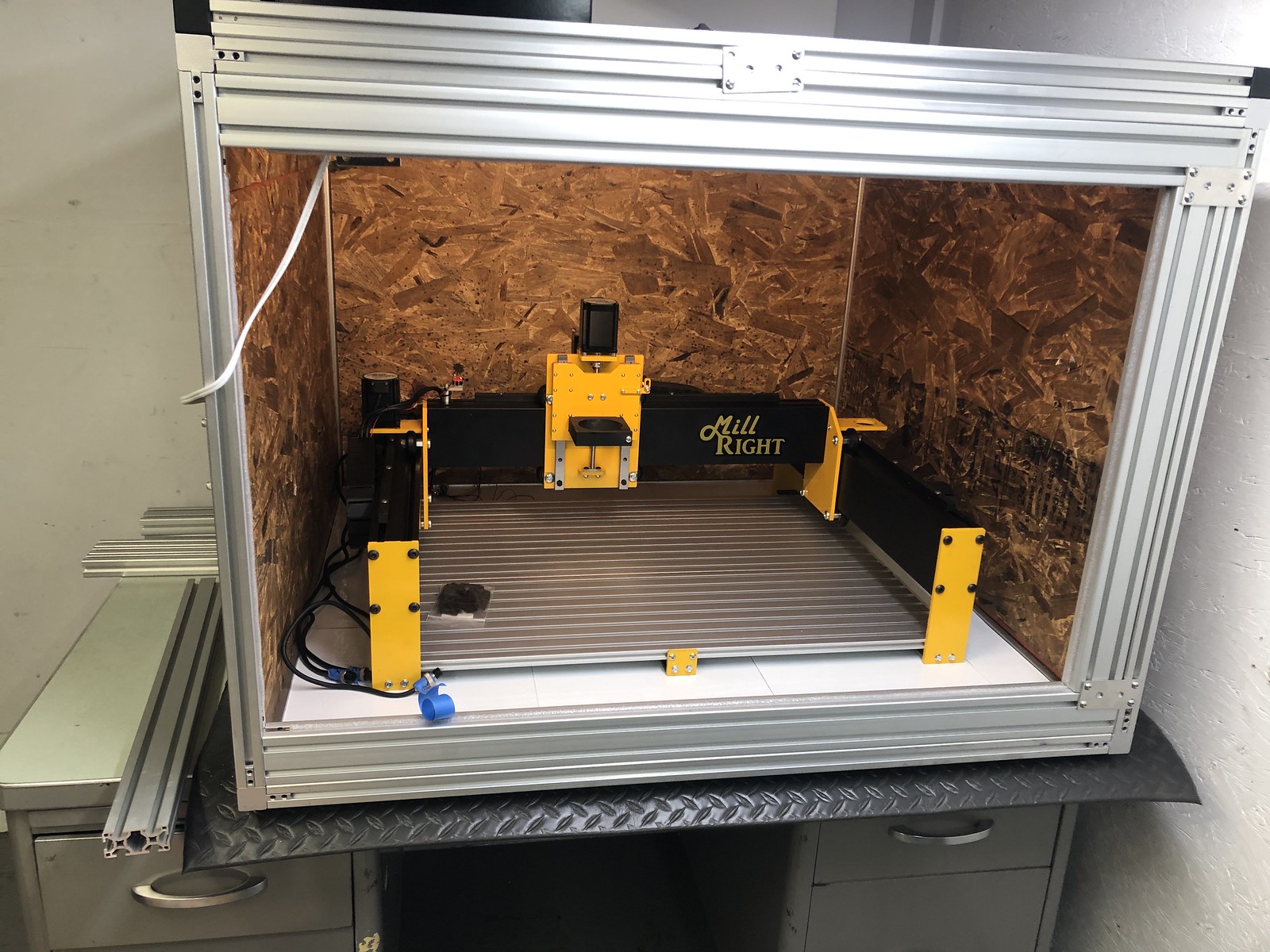 Welcome Perry I hope your Masso arrives quickly, I had to convert to Masso to get my Chinese built CNC running after the original controller started to have problems with powering on which apparently is a common fault, lucky I had recorded all the preset settings for it as I just loaded them into the Masso controller and it worked out of the box I had tried a couple of other controllers (Mach3 and Mach4) but getting the hardware to work with software was a nightmare. Fortunately the Masso is an integrated solution with this forum for support as well as Masso support. I suggest you go through all the video tutorials to get setup properly. But as with the other controllers I had a problem with smashing into end stops (Physical) which is quite dramatic I had no problems with the Masso. I have spent a little time tweaking the parameters and am very happy with the result. What software are you using for cam as getting the right post processor is important. I would suggest that you start a thread in the build part of the forum as not only will you get step by step advise but you will also be producing a tutorial as such for other people with your particular machine to help with their conversions later on. The forum is one of Masso strengths and the support on here is amazing.

I am excited for you and the machine you are going to end up with.

Thanks - Yeah I'm planning to document everything I can about the Mega V before I pull it apart - pictures of the wiring, DIP switch settings, etc. I think the drivers are pretty generic, along the lines of what StepperOnline sells (they may even be the same). I haven't removed them from the controller box yet, so i don't know if there are visible model numbers anywhere. The motors are supposedly custom built for Millright to their spec. I have some information from their forums on steps/mm for each axis, and that they're 4A/phase @48VDC, but little else on those. Again though, they look like pretty generic motors and I'm wondering if "to spec" just means the lengths of the hardwired cabling they used (which I'm removing and replacing with a 3D printed cap on each motor with a connector, so I can make cables that run the length I want without using extensions.)

I do all my CAD stuff in ViaCAD Pro, which is ok, if a little buggy. I like it much better than Fusion360, in part because it's not cloud-based, and also because they don't change the user interface without warning every few months. I really hate Fusion360. I may end up using it for CAM, but I'm also looking at https://www.deskproto.com/ which was recommended by someone as an alternative to Fusion360. Other than my (possibly irrational) hatred of Autodesk/Fusion360, I have my machine in a basement space in our office building. The walls and ceilings down there are 16" thick concrete. There's no internet, so anything that's cloud based is a drag because I have to come up to the 5th floor, where the office is, whenever the application requires a connection. I found that in Fusion360 it was often enough that it was just too annoying. I know you can work offline, but I'd rather just have an app that runs on my laptop and is offline.

I will be getting things set up initially with the DeWalt router, because the Mega V's Z motor extends over the Z axis such that the taller spindle doesn't fit. I've already designed a new Z-plate with a tramming platform on it, so the first thing I'll make is that, using the DeWalt, then I'll move on to the spindle upgrade. I'm sure I'll have lots of questions there as I've never used a spindle or set up a VFD... I'll definitely start a thread for this when the Masso arrives.

I like it much better than Fusion360, in part because it's not cloud-based, and also because they don't change the user interface without warning every few months. I really hate Fusion360.
Click to expand...

Sorry, you have a dislike for Fusion, I find it quite good for designing 3D models of projects and using it's "joints" for testing movement between parts. Yes Autodesk did change the UI several months ago for the better I think. But Fusion has grown beyond it's original design (3D modeling and CAM) and now they have merged Eagle electrical circuit software into it, making it a even bigger monster.

I have been using it since its inception. I do my design work at home and then dump the NC file onto Dropbox, to pick it up at the Men's Shed where the router is based (20 minute drive away). The shed's internet connection is too slow for Fusion to start properly, I need to fire up Fusion on the shed's laptop, go and have a cuppa, while Fusion downloads all the latest updates (as I only attend the shed once a week), then reboot Fusion, to do any tweaks in CAD or CAM.

Looking forward to your re-build. As Steve said post links to the drivers and VFD that you are using and ask questions if you get stuck. We all try to help where we can.

Have you tried powerline network adapters to get networking to your room with the CNC installed as the wifi link on Masso is a pretty good feature allowing you to send files to the Masso over wifi. I have a 64Gb memory stick in mine and not having to pull it out to load files is great. Though if you have a laptop you will be able to set the Masso to set up its own WiFi network to connect your laptop to when in the bunker. It would be good if you could use a cam package already supported by Masso (For a Masso specific post processor) but as Arie mentioned there is help available.

I was thinking that getting your spindle and vfd operational might be a priority if you are considering milling aluminum. Using the existing router will limit the speeds and feed's available to you and also the noise between a standard wood working router as apposed to a dedicated spindle is incomparable, my coolant pump seems to make more noise than the rest of my machine combined (I really need to get a new pump). but being able to get your spindle at the correct rpm for alloy will make a huge difference in your finished product

I'll set up a router in the basement so the masso and laptop are on their own network while they're there. There's no realistic way to get internet from our office down to the basement space. I've looked into it, and short of getting a second internet connection (which isn't worth the cost) for that space, it's going to cost a fortune to run a single ethernet cable there, just because of the way the building is set up. Not only is it 5 floors, but the basement space is in a physically separate building (connected but a different building nonetheless), so any ethernet run winds up being well about 500' because of how the cables have to be routed.
P

Sorry, you have a dislike for Fusion, I find it quite good for designing 3D models of projects and using it's "joints" for testing movement between parts. Yes Autodesk did change the UI several months ago for the better I think. But Fusion has grown beyond it's original design (3D modeling and CAM) and now they have merged Eagle electrical circuit software into it, making it a even bigger monster.

I have been using it since its inception. I do my design work at home and then dump the NC file onto Dropbox, to pick it up at the Men's Shed where the router is based (20 minute drive away). The shed's internet connection is too slow for Fusion to start properly, I need to fire up Fusion on the shed's laptop, go and have a cuppa, while Fusion downloads all the latest updates (as I only attend the shed once a week), then reboot Fusion, to do any tweaks in CAD or CAM.
Click to expand...

That's kind of my point though - The way they've implemented their software, there are all these forced upgrades, and with many of the major ones they've modified the software enough that someone who doesn't use it every single day has to re-learn it. In the 2 years I used it, there were at least two upgrades that changed things around enough that I lost a couple days trying to get my bearings again. The other thing with Fusion is that it breaks all kinds of usability rules with its bizarro-world UI. There's a reason why user interface standards exist and why people love using operating systems like the Mac OS - because you know where things are, and how they work, regardless of application. There are very few applications that truly need to reinvent the wheel like Fusion tries to do.

That said, I found that ViaCAD works more like I think about three dimensional objects, so it's a better fit for me anyway. It can be a bit buggy, but it's self-contained and I don't have to worry about upgrades causing problems, unless I choose to run the upgrades.